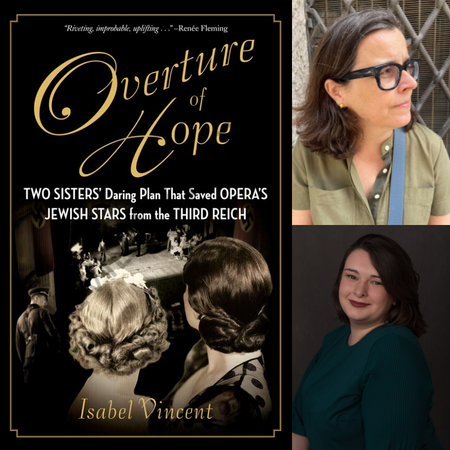 An Author’s Afternoon: Overture of Hope

Join Isabel Vincent and Alexandra Fee in a Q & A discussion about Vincent's new book, Overture of Hope.

Overture of Hope tells the tale of the Cook sisters in 1930s Europe, who both share a passion for opera. This takes them on frequent trips to Germany and Austria to see their favorite stars perform. But as clouds of war gather, the stars of Continental opera, many of whom are Jewish, face dark futures under the Nazis.

What can two British spinsters do? Against all odds, the sisters conspired to bring together worldwide opera aficionados and insiders in an operation to rescue Jews in the opera from horrific fates. By the time war did arrive, the Cooks and their operatives had plucked over two dozen Jewish men and women from the looming maw of the Holocaust and spirited them to safety in England.

Isabel Vincent is an award-winning investigative journalist for The New York Post and the author of nationally best-selling memoir Dinner with Edward, as well as Gilded Lily: Lily Safra, The Making of One of the World's Wealthiest Widows, Body and Souls, and See No Evil. Her book Hitler’s Silent Partners, an account of the Swiss bank accounts left dormant after the Nazi era, won the Yad Vashem Award for Holocaust History.

American mezzo-soprano Alexandra Fee is an advocate for community engagement with classical music. Passionate about helping enthusiasts and non-professionals feel more welcome in the classical music world, Alexandra believes her experiences have formed her dedication to celebrate the art form while progressing it for new audiences.

Books are sold separately at Red Jacket Books before and at the event and there will be a book signing with the author post-discussion.