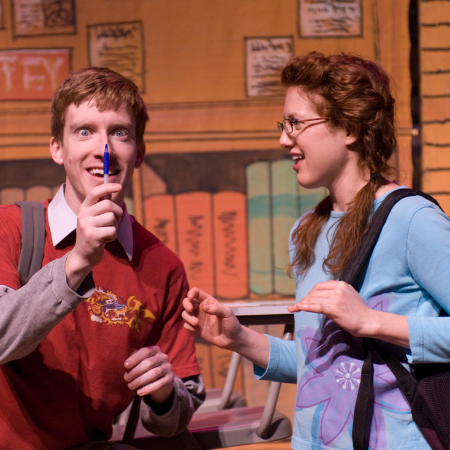 Based on the book by Andrew Clements. Nicholas Allen has plenty of ideas. When he ends up in Mrs. Granger’s language arts class, he has his best idea ever. He decides to create his own word…FRINDLE! Before long Nick’s word creates a buzz in his school, his town and then to his surprise it spreads all around the country, and a power struggle erupts with the strict Mrs. Granger. Will the word “Frindle” win? Based on the multiple award winning best-selling novel by Andrew Clements this quirky, imaginative tale about creative thought and the power of words will have your young audience inventing their own words.

We know that it’s hard to plan anything right now. But give yourself something to look forward to, and reserve tickets to one of our world-class School Day Performances – risk free! Anything booked today will be held for you until next school year. Confirmation contracts will not be sent out until September. Even after your confirmation contract is signed, should you or your school decide not to participate, contact us up to six weeks before show date in order to cancel without charge.