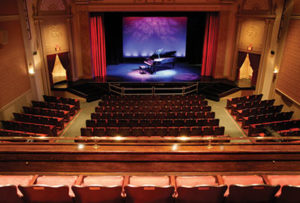 Our building has been part of Westhampton Beach for over three generations. In June of 1933, former Governor Alfred E. Smith was on hand for the opening of Prudential’s Westhampton Theatre as a movie theater. The building was later purchased by United Artists and was changed to a single-theater movie house. However, by the mid-1990’s, it was determined that the theater was “not financially viable.” The United Artist Theatre was set to be demolished.

From Dream to Curtain Raising

In 1996, a group of concerned village residents and business owners, led by investor Len Conway and retailer Lon Sabella, stepped forward with the intention of buying the movie theater from United Artists.

The movement to create a performing arts space out of a shuttered movie theater has been a labor of love. Nearly 70 people came forward with tens of thousands of dollars to support the theater purchase. The new group, Westhampton Beach Performing Arts Center Inc, bought the rundown theater for $300,000 in May 1997. In the course of only a year, volunteers raised 60 percent of the $2.8 million needed to transform the building into a state-of-the-art facility.

Among the major donations, the Mollie Parnis Livingston Foundation made a $250,000 gift. The Center’s auditorium is named in honor of the internationally acclaimed fashion designer.

The early fundraising success facilitated the retention of nationally recognized theater consultant Robert Lorelli, whose projects include New York’s Carnegie Hall. He developed the design and engineering requirements for the theater’s sound, lighting and rigging systems and related equipment. Skilled architects and area residents Jay Sears and Robert Gruber donated their services and designed key aspects of the building and its finish.

Within hours of the closing, construction crews were already gutting the facility. The general contractor, Remsenburg resident Roger Stevens, part-owner of Island Companies, provided his services at cost. In just seven months, his company completed renovating the theater. This included the installation of a new stage, orchestra pit and seating areas, as well as re-wiring the entire building. Numerous in-kind contributions of labor, services and materials saved the Center several hundred thousand dollars in costs.

The building plans delicately balanced the old with the new, maintaining the theater’s old world charm and installing new technically advanced systems, handicapped access and fire safety upgrades. When the renovation began in November 1997, architectural details were removed for safekeeping, and molds were cast for reproduction. Sconces and chandeliers from the auditorium and the lobby’s wood details were saved and restored and the period marquee was completely refurbished.

Throughout the process, the community was the backbone of the fund-raising effort. More than half the cost of the entire renovation project came from residents and business owners. And on July 4, 1998, the new Westhampton Beach Performing Arts Center reopened its doors to the public.

Despite an aggressive and successful fund-raising campaign, the board was still forced to borrow nearly $1.6 million from North Fork Bank when the theater reopened in 1998, raising the total amount of the two loans to about $1.8 million. The board started paying down the interest and principal after reopening in July 1997, and made its last payment in June 2005. But in order to stay in business, the Center must raise more than half its budget each year since ticket sales only cover half of the costs of running the theater.

As we’ve expanded our program, our reach has extended both eastward and westward. From Montauk to Manhattan, our patrons agree that we have a jewel of a theater. Come and experience it for yourself!