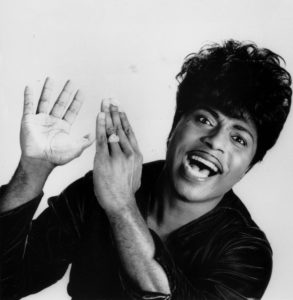 When Richard Penniman died on May 9 of this year at the age of 87, he was one of the very last living rock & roll artists from the 1950s. Of the pioneering legends, only Jerry Lee Lewis (84) and Don Everly (83) of the Everly Brothers are still with us.*

No single person was the inventor of rock & roll, but Little Richard comes as close as any to claiming that distinction. Chuck Berry may have been the architect. Elvis may have made the pop crossover. But Little Richard was the exemplar of what rock & roll was all about, or could be: outrageous, uninhibited, and visceral.

In a short but spectacular career in the 1950s and numerous comebacks afterward, Richard Wayne Penniman, of Macon, Georgia, infused rock & roll with new levels of flamboyance and showmanship. Everyone from Michael Jackson to David Bowie to Prince owed something to Little Richard. He wore makeup and processed hair at a time when Elvis’ sideburns made some people uncomfortable. His crazy-spangled costumes prefigured the glam rock era of the ‘70s. And before he became a star of the folk/protest movement, a teenaged Bob Dylan was a piano-pounding fan of . . . you guessed it. When Dylan wore his hair teased up in the ‘60s, he explained that he was trying to look like Little Richard.

Rock & roll and rhythm & blues had always drawn on church and gospel singing for its emotive power. But Richard sounded like he had come howling out of a Pentecostal church of charismatic snake-handlers in the backwoods of Georgia. His songs themselves are the essence of rock & roll: “Good Golly, Miss Molly,” “Tutti Frutti,” “Rip It Up,” “Long Tall Sally.” “A-wop-bop-a-loo-bop-a-lop-bam-boom!” Who else could even think up a nonsense-syllable intro like that?  His performances were more than just a musical show; he climbed on top of the piano and the amplifiers, shed articles of his clothing and threw them to the crowd. Just as he was taking off, suddenly, it was all too much. Not only were the defenders of decency closing in on rock & roll but on a plane flight to Australia, Penniman had an epiphany. He prayed that the plane would not crash and if it did not, he would give up rock & roll for the Bible. And it didn’t and he did. He threw his jewelry into the bay, announced his retirement, and attended Bible college. He released gospel records and was endorsed by none other than Mahalia Jackson.

Gradually, he returned to the pop world and started a comeback. He saw that Elvis Presley and many other ‘50s stars had revived their moribund careers and there was an audience eager to appreciate the pioneers of rock & roll. Now there is one less of them among us.

*Other rock & roll artists whose careers began in the 1950s and are still alive, although not all performing:

Abdul “Duke” Fakir of The Four Tops (84), a founding member and still performing with the group.

Otis Williams (78), a founding member of The Temptations and still performing with the group.

Wanda Jackson (82), rockabilly and country singer whose early records exemplified the point at which rock & roll was considered a new kind of country music. She is currently retired.

Larry Collins (75), guitar whiz at 10 years old as one of The Collins Kids with his sister Lorrie, performing rockin’ country music in a similar vein as Wanda Jackson.

Buddy Guy (84), blues guitarist, is one of the last authentic original exponents of electric Chicago blues, and still performs regularly.

Al Rex, the original bassist of Bill Haley and His Comets, who had the first genuine rock & roll hit with “Rock Around the Clock,” passed away in May at 91.

Tommy DeVito, guitarist who was in the group that became The Four Seasons, passed away in September at 92.