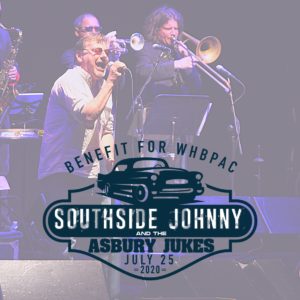 When live music became one of the first casualties of the coronavirus, it wasn’t just a loss for music fans; it was a loss for musical acts that depended on live performances for their livings – an act like Southside Johnny and the Asbury Jukes, for example, who epitomized the reason that people go to musical concerts in the first place. They assault show-goers with their upbeat, horn-heavy, soul-spirited rockin’ rhythm & blues that would make you forget all about the coronavirus for a while if you could just get out to see them.

So when you finally have the opportunity to put on live music for the first time in months, what’s the first act you think of to get the party started? Southside Johnny and the Asbury Jukes, of course.

The current lineup of the Jukes will play the first live music concerts in New York State since the shutdown over coronavirus in March, in the form of two benefit concerts on the Great Lawn in Westhampton Beach. The event will be a drive-in affair, as attendees will watch from their cars in order to maintain social distancing – but think of it as watching Woodstock from your Volkswagen bus (who wants to put up with all that mud anyway?) The drive-in movie theater epitomized the suburban car culture of the 1950s, and cars have played a big part in the popular image of Jersey, from Bruce Springsteen’s numerous references in his songs to the cult movie Eddie and the Cruisers, a fable about a legendary Jersey rock band of the 1960s for which Southside Johnny served as a technical adviser. Though the Cruisers of the movie were not modeled on any real band in particular, a telling moment comes when one of the members questions group leader Eddie’s ambitions for the band:

“We’re not great, we’re just a bunch of guys from Jersey.”

Though it sounds like the popular idea of a hardworking bar band that’s not trying to be the next Emerson Lake & Palmer, the ten-piece Jukes is a living testimonial to perseverance. Their type of rhythm & blues-based rock & roll typifies the working-class roots of coastal and central New Jersey, and was central to making Asbury Park, a fading boardwalk town, a rock & roll Valhalla in the 1970s.

That the Jukes emerged from the salty boardwalk air alongside Jersey’s greatest gift to rock and roll is no coincidence. “Southside” Johnny Lyon, having cultivated the “Jersey Shore Sound” born of doo-wop, rock and roll, and the heavy Italian-American influence of Franki Valli , bears the distinction of forming the kind of band that Bruce Springsteen initially wanted to put together. Between the demise of his late-‘60s hard-rock band, Steel Mill, and the beginnings of the E Street Band, Springsteen formed The Bruce Springsteen Band, a soulful ensemble with horns, harmony singers, and an emphasis on songcraft. With 10 or so members, it was financially unsustainable for the success-minded bandleader, but three of its members would become stalwart Springsteen sidemen: Miami Steve Van Zandt would go on to join the Jukes and eventually the E Street Band, while organist Danny Federici and bassist Gary Tallent would become a lifetime E Streeters.

I met Southside Johnny Lyon briefly in Cincinnati in 1978. Working for a local newspaper, I had gotten tickets to see the J. Geils Band at Riverfront Coliseum, with Southside Johnny and the Asbury Jukes as the opening act. I was aware of the Jukes and their connection to Springsteen and the Jersey scene, but didn’t fully appreciate all that yet. J. Geils had the reputation of being a top party band and I had not been particularly impressed before, but they seemed to be evolving into a slicker, more progressive pop outfit, so I was curious.

Someone who worked for the Jukes’ record company, Epic, offered to get me backstage. In the dressing room, it was noisy. Various band members and other were yukking it up over beers. Stan Harrison, the group’s sax player, sat in a corner reading a paperback book. I watched the drummer put together a sandwich from the generic catered spread, then study it mournfully, as if this meal was the best he could expect for a while. Southside Johnny was still cooling off from his performance, but when we were introduced, he was open and friendly. We didn’t do a formal interview, just chatted for a few minutes. (Although I could have been a wiseass and asked, “Hey Southside, where did you ever get a name like John?”)

Across the room someone asked Johnny who he was talking to.

“Him?” he said facetiously. “He’s just some crum-bum critic.”

I replied, “I’ll have you know I just reviewed your new album and thought it was great . . . Southside.”

Presumably we all laughed. I don’t remember anything else from that brief encounter. Just a few months later I moved to New York and saw the group again at the old Wollman Rink in Central Park. But I would say many times over the years, “I went to see J. Geils but came away a Southside Johnny convert.”